Film / Man of the House 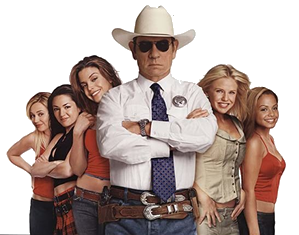 "This is my happy face!"
— Roland Sharp
Advertisement:

A 2005 action/comedy film centered around a group of very hot and bubbly University of Texas cheerleaders who inadvertently witness a murder in connection with the shooting of a Texas Ranger. The danger of their situation makes their protection the responsibility of gruff, by-the-book Ranger Roland Sharp, played by Tommy Lee Jones. As a cover for his detail, he moves into the group's sorority house under the guise of being their cheerleading coach. Hilarity Ensues.

Not to be confused with the 1995 Disney family comedy/drama Man of the House, starring Jonathan Taylor Thomas and Chevy Chase, or The '70s Brit Com Man About the House.