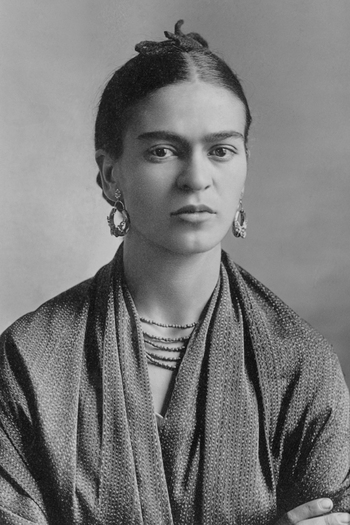 Magdalena Carmen Frida Kahlo y Calderón (July 6th, 1907-July 13th, 1954) was a Mexican painter, who we know best for her many self-portraits, portraits, and paintings inspired by Mexico and Nature, employing a naive folk art style, with autobiographical elements mixed with fantasy, belonging to the Mexicayotl movement. In her art, she explored identity, postcolonialism, gender, class, and race in Mexico.

She was born in 1907 to a German father, Guillermo Kahlo, and a mestiza mother, Matilde Calderón y González, Kahlo lived most of her life in La Casa Azul in the city of Coyoacán. When she was six, she contracted polio, which stunted her leg. When she was 18, in 1925, she was in a bus accident and was left bedridden for three months afterwards (in a plaster corset); the incident left her with chronic illness for the rest of her life. In 1928, she was introduced to Diego Rivera, who she would divorce in 1939 but remarry in 1940. Among her many affairs, she had one with Leon Trotsky. Kahlo also was quite openly bisexual, having same-sex relationships that she didn't hide.

Salma Hayek portrayed her in the 2002 biopic Frida.

Tropes for Frida and her works: