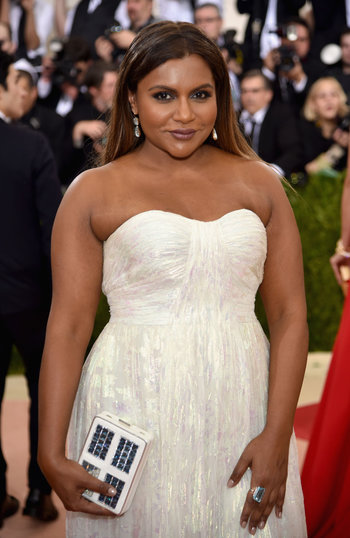 She's perhaps best known for her roles as Kelly Kapoor on NBC's The Office and Dr. Mindy Lahiri on Hulu's note formerly Fox The Mindy Project, the latter of which she created. From 2012 to 2015, she was the only actor of Indian descent headlining a series on American network television. note The Mindy Project moved to Hulu for the 2015-2016 season, while Quantico star Priyanka Chopra replaced her for the distinction; fellow Indian-American actor Aziz Ansari's Netflix series Master of None is also technically made for web, so it doesn't count

Mindy has written two memoirs to date: 2011's Is Everyone Hanging Out Without Me? (And Other Concerns), and 2015's Why Not Me?

She's also provided the voices of Taffyta Muttonfudge in Disney's Wreck-It Ralph and Disgust in Pixar's Inside Out.