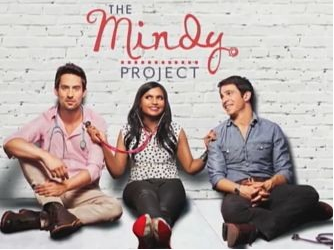 "Maybe I won't get married, you know? Maybe I'll do one of those Eat, Pray, Love things. Ugh, no, I don't want to pray. Forget it, I'll just die alone."
— Mindy Lahiri
Advertisement:

Created by, and starring, Mindy Kaling, one of the writers of the American version of The Office, this rom-com series began airing in 2012 on Fox. This series is notable for having the first South-Asian lead on American television, still getting in trouble for alleged racism in having her date white men, and its absurdly high cast turnover rate.

Dr. Mindy Lahiri is a successful OB/GYN living a comfortable single life in New York City. At her practice, she is surrounded by colleagues that both support her and drive her nuts. However, a lifetime of watching romantic comedies has convinced her that she needs to put more effort into finding her life partner. Hilarity Ensues.

In 2015, the show was canceled by Fox and subsequently picked up by Hulu for the fourth season. This was somewhat notable not necessarily for the fact outright, but because there were (as it turned out accurate) rumors of such well before Fox even officially announced the cancellation

which could potentially point to a greater trend of TV shows making a Channel Hop to online distribution.

The show aired its sixth and final season in 2017.

Now has a character sheet that needs a lot of love. NOT to be confused with Mork & Mindy