Series / How I Met Your Mother 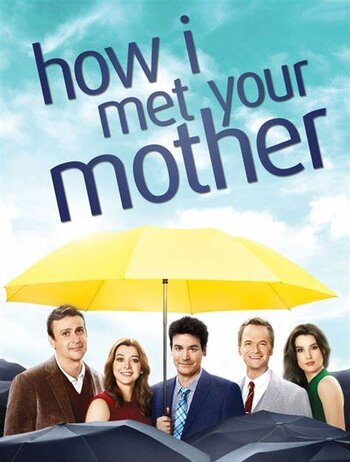 L - R: Marshall, Lily, Ted, Barney, Robin
Future Ted: Kids, I'm gonna tell you an incredible story—the story of how I met your mother.
Ted's Son: Are we being punished for something?
Future Ted: (confused) No.
Ted's Daughter: Yeah, is this gonna take a while?
Future Ted: Yes.
Advertisement:

In the year 2030, Ted Mosby recounts to his kids the story of how he and their mother met and fell in love. Although each episode is ostensibly an important step on the way to Ted meeting "The Mother," it seems Ted is the kind of person who uses this basic premise as an excuse to ramble off onto hundreds of other, completely unrelated anecdotes. For nine seasons' worth of episodes, Ted discusses the modern-day in a nostalgic way and describes the strong bond between Ted and his group of friends.

In the year 2005, Ted (Josh Radnor) is an architect living in New York with his best friend, aspiring lawyer Marshall Eriksen (Jason Segel). When Marshall announces that he is getting engaged to his college sweetheart, Lily Aldrin (Alyson Hannigan), it prompts Ted to take an introspective look at his life and decide that he is finally ready to settle down and start searching for "The One," much to the disgust of his other "friend" and serial womanizer Barney Stinson (Neil Patrick Harris).

Enter Robin Scherbatsky (Cobie Smulders), a TV news reporter from Canada with whom Ted falls in love at first sight and manages to scare off just as quickly. Though she is affirmatively not the destined Mother of Ted's future children, she befriends Lily and goes on to become an integral part of the group. Over the next decade, the five friends struggle with romance, careers, lost dreams and lives that did not turn out the way they expected, but in retrospect led them all to the ending they hoped for.

This sitcom uses its Framing Device and narrator (Bob Saget, uncredited) to surprisingly good effect, admitting to parts where the narrator honestly had no first-hand recollection of the events, doing very swift flashbacks to build up to a punchline or events are recalled out-of-order in order to create twists and surprises that achieve maximum impact (every method can be seen in the memorable episode "The Pineapple Incident"). In other episodes, the framing device allows Ted to retell stories involving foul curse words or drugs by substituting each with an Unusual Euphemism for his children's benefit.

The show at first feels very similar to a regular sitcom but is actually a mixture of both single camera and three cameras. There is extensive outdoor location filming in addition to the regular sitcom-style sets. The narrative gimmick gives the show an edge in allowing them to portray a fairly complex universe of seemingly unimportant events and myriad callbacks. The show went 9 seasons, covering the years 2005-2013. The first eight seasons were contemporary and in approximate Real Time. The last season centered around the weekend Ted and the Mother met, although utilizing plenty of the show's standard Anachronic Order of events.

A spinoff named How I Met Your Dad was announced as a gender-flipped version of the show in the fall of 2013, following unrelated characters and produced by the same people. A pilot was shot but was not picked up, and the project spent many years in Development Hell before finally receiving a straight-to-series order from Hulu in 2021, now titled How I Met Your Father and starring Hilary Duff.

You can also vote for best episodes here

open/close all folders
A-C
D-F
In a later episode, Sandy shows all of his and Robin's co-workers various embarrassing videos she's been in, including the commercial.
G-I
J-L
M-O
P-R
S-U
V-Z
Season-specific tropes

Example of:
The Chessmaster