Series / How Not to Live Your Life 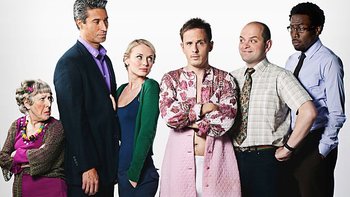 How Not to Live Your Life is a British comedy programme written by and starring Dan Clark, following 29-year old Don Danbury (Clark), a dysfunctional Jerkass dickhead orphan who can barely look after himself and is very close to losing his job. As luck would have it, Don inherits his grandmother's house by default with instructions to 'sort out your life and stop being such a dickhead'. Initially believing it is free, Don is informed that the inheritance is conditional; he must pay his grandmother's mortgage if he wishes to keep the house. Soon after moving in, Don meets his grandmother's old carer, Eddie Singh, who, even after learning that she is dead, continues to look after the house (and Don), expecting nothing in return.

In order to help pay the mortgage, Don must take in a lodger; in a twist of fate the first (normal) person to answer the ad is his high school crush, Abby. Unfortunately for him, Abby also has a boyfriend, Karl (who Don immediately calls Kockface), who spends much of his time round the Danbury household antagonising Don. Much of the first series revolves around this love triangle, which ends in the two splitting up but Abby going travelling to "get her head together", leaving Don alone.

In light of this, Don must take on another lodger in Series 2 and settles for mature student Samantha, who joins the main cast. Also included in this is former recurring character, the next-door neighbour Mrs. Treacher, who is upgraded as Eddie becomes her full-time carer.

In 2011, there was a Grand Finale Christmas Episode, which wrapped up the whole series and its characters.