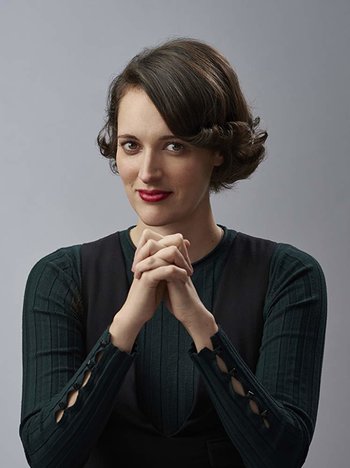 "I don't think you can be a good actor and want to please, because so much about performing and acting is surprising people."
Advertisement:

Phoebe Mary Waller-Bridge (born 14 July 1985 in London, England) is a BAFTA-winning English actress and writer. She created and starred in Crashing and Fleabag and adapted Luke Jennings' Codename Villanelle into the highly-acclaimed series Killing Eve. Her television career also includes a regular role in the sitcom The Cafe and a supporting turn in the second series of Broadchurch.note Her association with Broadchurch creator Chris Chibnall led to rumors that he might cast Phoebe as the first female Doctor in Doctor Who. She denied the rumors but expressed interest in playing a "snake alien" in the show.

Waller-Bridge's film career consisted mainly of historical dramas such as Albert Nobbs, The Iron Lady and Goodbye Christopher Robin. However, that changed when she was cast as the voice of the droid L3-37 in Solo: A Star Wars Story.