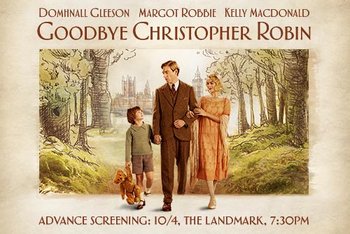 Goodbye Christopher Robin is a 2017 Biopic of A. A. Milne and how he came to write the Winnie-the-Pooh books. Domhnall Gleeson plays Milne and Margot Robbie plays his wife Daphne.

A war veteran, A.A. Milne feels depressed about writing plays for adults. He moves his wife and young son "Billy" Christopher Robin to the countryside, where Billy's childhood games inspire his most famous work. There is just one problem: Billy isn't going to be a boy forever, while the world expects him to be.

Not to be confused with the Disney film Christopher Robin, which released the following year and is a Live-Action Adaptation of Winnie the Pooh.

Tropes for this film include