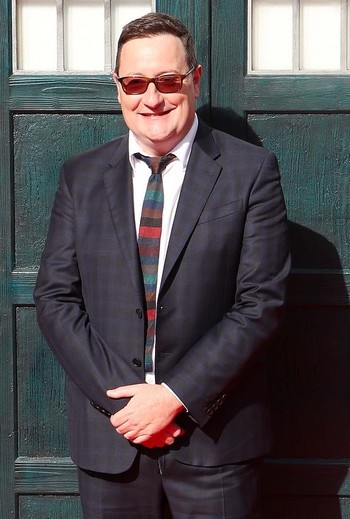 "I'm not sure I fully realised how much fun this was going to be. And it's been part of my brief to everyone who's joined: enjoy it, on behalf of every fan, every viewer, every child, every adult who would love to be working on this show. We know how lucky we are. And we're going to relish every moment for you."
— Chibnall on being involved with Doctor Who
Advertisement:

Chris Chibnall (born 1970) is an English television writer. He was co-producer and head writer on Torchwood's first two series, writing eight episodes for the show. He was also a showrunner for Law & Order: UK and wrote a few episodes of Life on Mars. He subsequently went on to enjoy major success as the creator and showrunner of Broadchurch.

Chibnall wrote five episodes of Torchwood's parent show Doctor Who, including the two-parter "The Hungry Earth" and "Cold Blood", which had the first on-screen appearance of the Silurians in 26 years, before taking over as showrunner with Series 11. His very first step upon taking over the show was a doozy: making the Doctor female for the first time in the show's history with Broadchurch actress Jodie Whittaker. After the announcement, he proudly stated that he'd wanted to do it since he first started working on the show. Alongside the casting of Whittaker, other measures Chibnall took to reinvent the series included redesigning the TARDIS shape and interior, redesigning the sonic screwdriver, shortening Series 11 to ten episodes and bumping up the typical episode runtime to 50 minutes rather than the revival's previous 45-minute norm.

Chibnall's period as Who showrunner proved to be one of the most controversial of all time, initially due to featuring the first female Doctor but later due to the major Retcons to the Doctor's origins and relationship with the Time Lords revealed during Series 12. In July 2021, he confirmed he would be stepping down as showrunner

, concurrent with Whittaker leaving the show, and he was replaced by Russell T. Davies, the first time in the show's entire history that a past producer had returned.

He's also known in Who fandom for that one time in the 1980s he went on TV to confront John Nathan-Turner and Pip and Jane Baker about the perceived Seasonal Rot connected to the tenure of the Sixth Doctor.

His Doctor Who work provides examples of: