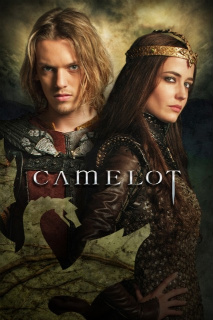 Sibling Rivalry taken to its natural extreme
"You're not made of kings, boy, but of common clay."
—Morgan Pendragon
Advertisement:

A series co-produced by Starz and GK-TV, Camelot is an adaptation of the Arthurian Legend. The show claims to be based on Sir Thomas Malory's Le Morte Darthur, though many liberties have been taken and Arthur, Merlin and company are characterized differently from common perceptions.

After King Uther Pendragon’s sudden death, the sorcerer Merlin (Joseph Fiennes) brings his unknown son and official heir, the young and impetuous Arthur (Jamie Campbell Bower), into the limelight. However, Arthur's elder half sister Morgan (Eva Green) believes the throne is rightfully hers. Morgan battles Arthur with dark arts which may be beyond her control. Meanwhile Arthur has to deal with his feelings for Guinevere (Tamsin Egerton), who is betrothed to another man (a man who on at least one occasion saved his life, no less).

Not to be mistaken with the BBC1 series Merlin (2008), another series based on the legend, the musical of the same name, or the French series with a similar name.