Humans Are the Real Monsters 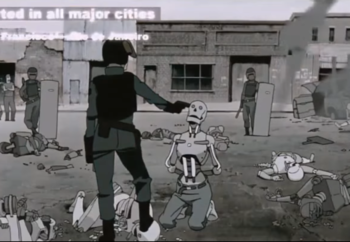 This stuff eventually caught up with us. In a big way, too.
"We're going to recapture my creatures before they get hurt. They are currently in alien terrain, surrounded by millions of the most vicious creatures on the planet: humans."
— Newt Scamander, Fantastic Beasts and Where to Find Them
Advertisement:

So the Speculative Fiction protagonist is fighting one or more nonhuman entities, and is one of the major forces of his kind. Battling onward, the hero is hit with true horror: the villains aren't fighting their equals or lessers, but their own monsters, who see the hero hat through a history of violent characteristics and nefarious motivations.

Since opposing races tend to be sufficiently advanced or incredibly large and/or powerful, any action of wanting or invading can be seen as worse due to their lack of needs. Due to unfortunate parallels to current human greed and actions, however, it's easy to draw comparisons and show how humans can easily fit villainous tropes. Additionally, expect any form of attack against humans to be either out of fear or revenge. On a large enough scale, expect an Anti-Human Alliance or having Humanity on Trial.

This trope typically comes in three distinct varieties, but the basic point is the same:

In all cases, humanity will show characteristics of the Absolute Xenophobe to one degree or another; no matter how sincerely an alien race may state its intentions to do good or seek peace, human perspective will generally be it's us or "them."

A potential problem with this trope is the relative level of power between the humans and the monsters. If a writer has Puny Humans on one side and uber-powerful monsters on the other side, then they're really going to need to push the Muggles Do It Better angle to sustain the willing suspension of disbelief. Otherwise, nobody is going to take Cthulhu's sob story of living in terror of the local village mob's pitchforks seriously. For example, show how the Enslaved Elves were brought to heel or how the Hunter of Monsters commits Van Helsing Hate Crimes.

Frequently it will be claimed that humans are the only species in the universe to wage war on their own kind or kill just for the heck of it, which has long since been disproven by sciencenote Penguins committing sexual assault, and several tribes of monkeys and apes waging war on each other, being just a few examples.. Still, the powerful message of this trope results in it being an Undead Horse Trope.

This is a Super-Trope to Beware the Living, which is this trope in the context of a Zombie Apocalypse.

Note: If an example is called such by a villainous equalnote (e.g. a human villain noting the heroic humans are the real monsters) then it is not this trope. Said examples will typically fall under Straw Nihilist or The Social Darwinist (among others).