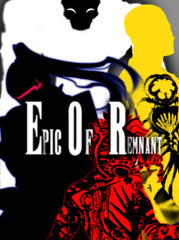 During the final battle against Tiamat in Babylonia, Gudako and her Servants fall into her Black Mud. Angra Mainyu tries to save them by drawing them into his Reality Marble, but something strange happens and they get transported to the world of Remnant.

Avenger Angra Mainyu, Archer EMIYA Alter, Berserker Lancelot, and Assassin Hassan of the Cursed Arm wake up to find their Master Gudako has been damaged by the Black Mud and is in a coma. Even more shocking, the four Servants have been turned into human teenagers, though they retain their powers. After defeating some Grimm, Ozpin finds them and offers to provide Gudako with medical attention if they will become students at Beacon Academy, which they grudgingly accept.

They arrived a few days before Volume 1 of RWBY starts.