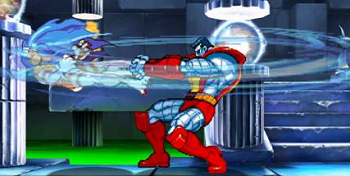 And now the Trunchbull was leaning back against the weight of the whirling girl and pivoting expertly on her toes, spinning round and round, and soon Amanda Thripp was travelling so fast she became a blur, and suddenly, with a mighty grunt, the Trunchbull let go of her pigtails and Amanda went sailing like a rocket right over the wire fence of the playground and high up into the sky.
— Matilda, Roald Dahl
Advertisement:

Grabbing some part of your opponent's body, spinning around one or more turns, and then letting go!

This is a popular move due to its sheer impressiveness, though it's more than a little impractical. Usually, it's the legs or feet that are grabbed, but in some cases it's the arms, the heads, or the tail (if present).

May be combined with Grievous Harm with a Body (hitting other people either on the turns or with the throw) or A Twinkle in the Sky. Compare also Metronomic Man Mashing and Spinning Piledriver. It can be done with an ally, as a physically slightly more believable way to do a Fastball Special when the hurlee is heavy.

A Sub-Trope of Wrestler in All of Us, though it's seldom seen in wrestling (which should tell something of how practical the move really is). There it often is called a "Giant Swing", i's done by grabbing the opponent's legs and putting it under their arms and then pivots, spinning around to lift the opponent off the mat. The name "Hammer Throw" refers to the one of the Summer Olympic Games' events; this trope is when someone replaces the "hammer" as the thing being thrown.

The hurler pretty much has to have Super Strength, Charles Atlas Superpower, or at least be very, very angry.

Kazuma Kiryu uses the Giant Swing move to send some poor mooks onto a wall, tree and car window. Face first, for the first and second mook.

Kazuma Kiryu uses the Giant Swing move to send some poor mooks onto a wall, tree and car window. Face first, for the first and second mook.