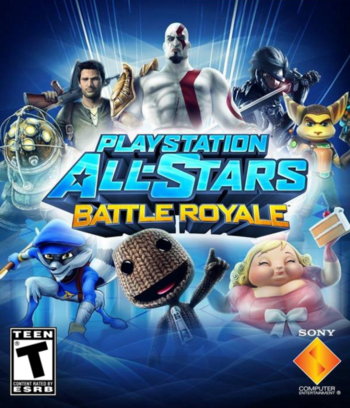 before being officially announced by GameTrailers TV and on the PlayStation Blog on April 26th, 2012. Following that, it released in North America on November 20th, 2012.

Many of the characters' fighting styles and techniques/abilities closely mirror or at least maintain the flavor of how they would play inside their own series, and nearly the entire cast has their most iconic voice actors reprising their roles. Stage interaction and items play a part in game-play, with many of them damaging built AP or causing a Status Effect. Stages are notable for mashing up at least two franchises, with one universe hosting the battle while the other invades, while the items frequently feature some of the more iconic PlayStation props/weapons. The game's story has the Anthropomorphic Personification of the PlayStation's power bringing the fighters and their worlds together for various reasons.