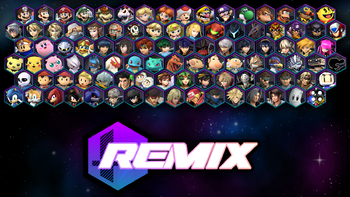 (Nearly) EVERYONE IS BACK!
Advertisement:

Project M EX REMIX, or PMEX REMIX for short, is a Game Mod of Super Smash Bros. Brawl in the vein of the original Project M, building on each of its characters while adding many veterans from Super Smash Bros. for Nintendo 3DS and Wii U and Super Smash Bros. Ultimate along with many, many new faces. In what can basically be considered the culmination of the Brawl modding scene over 12 years, PMEX Remix features a whopping 98 fighters - that's 9 more than Ultimate's final count of 89 at the end of its DLC development in October 2021 - from across Nintendo's franchises and beyond, all while incorporating the in-depth competitive mechanics of Super Smash Bros. Melee.

The hack has proven stupendously popular, garnering over 85400 downloads as of November 2021. As of November 2021, PMEX Remix is in development as beta version 0.91. The trailer can be seen here

, and the patch can be downloaded here

. As with other Brawl mods, you will need a copy of Brawl and a 2 GB SD card (it has to be 2 GB or smaller) for the hackless method to work. If you already have the Homebrew Channel, the SD card can be larger. As the game is still in development, it's occasionally prone to freezing and some single-player modes don't work, but Vs. Matches work perfectly fine. Not all characters have a Final Smash or a Kirby hat.

Advertisement:
Playable Roster
Characters in italics are in progress, and are officially slated to be added to the game in a future update.

For information on the characters, see the character sheets: Melee Veterans, Brawl Newcomers, Remix Veterans and Remix Newcomers (the latter two are under construction).