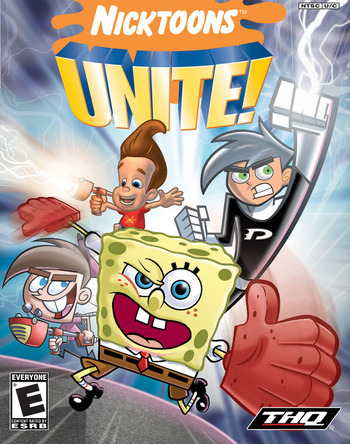 Notice how it's SpongeBob who's mugging for the camera?
Advertisement:

A series of multiconsole video games combining multiple cartoons featured on the children's TV network Nickelodeon. Only the first game in this series goes by the title Nicktoons Unite!, but considering all four games are about Nicktoons characters joining forces to defeat a common enemy, we might as well consider it the name of the series as well.

This series was "succeeded" in 2011 by Nicktoons MLB, Nickelodeon Kart Racers in 2018, and Nickelodeon All-Star Brawl in 2021.

open/close all folders
The series in general
Nicktoons Unite!
Battle for Volcano Island
Attack of the Toybots
Globs of Doom