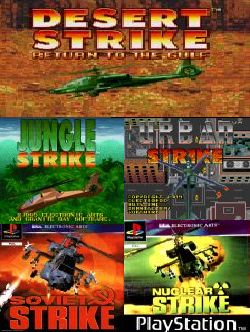 GET TO DA CHOPPA!!!
Advertisement:

The Strike Series were a series of five games from Electronic Arts, where the player took control of a combat helicopter to undertake several missions for the US government (and later on a mercenary organisation known as STRIKE), usually attempting to thwart the plans and lives of various megalomaniacal dictators or warlords threatening the world's safety.

The games were played from an isometric perspective, and as such were more tactical than an out and out shooting game, requiring precision in 360 degrees.

Oddly, it's a franchise that its publisher never considered for a modern incarnation, despite fairly strong sales during its heyday.