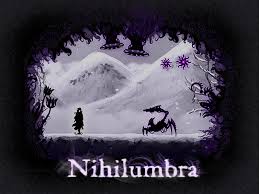 You are born...
Advertisement:

Meet Born, a chunk of Void that acquired a mind of its own. They emerge into a seemingly empty world, and make their way through it, learning something new at every turn. However, the Void would rather be whole, and is on Born's back at every turn, hounding and haunting their every step. As Born flees throughout the landscape, dodging monsters and solving puzzles, their only hope for survival is a series of strange, colored flowers that allow them to subtly manipulate the world around them. But the Void is watching and learning just as fast as Born is, and when the world is only so big they can't run forever...

Nihilumbra is a 2013 platformer developed by Beautifun Games, with the added element of colors, that allow the player to paint certain parts of the terrain with a particular color, giving it properties like stickiness, slipperiness, and heat. You will need all of those in order to survive, if only for just a little longer.