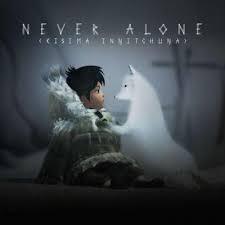 Never Alone (Iñupiaq: Kisima Ingitchuna) is a Co-Op Multiplayer / single player 2½D Puzzle Platformer built on the Unity engine by Upper One Games and E-Line Media. This game is the first game in E-Line Media's series of World Games, Edutainment titles intended to expose gamers to varied world cultures. Upper One Games is based in Anchorage, Alaska, and Never Alone was created in close cooperation with elders and storytellers from the Iñupiat people of northern Alaska.
Advertisement:

The protagonist is a young Iñupiaq girl named Nuna. With the assistance of her new-found companion, an arctic fox, she sets out to find the source of the endless blizzard that has left the people of her village unable to hunt and on the verge of starvation. Along the way, they unlock Cultural Insights—video clips with discussions from Iñupiaq ambassadors reflecting primarily on their beliefs and old ways of life—by finding owls in the world. The story is an adaptation of the traditional oral story of Kunuuksaayuka.

Never Alone is available for PS4, XBox One, Wii U, and PC through GOG.com and Steam. On July 28th, Never Alone: Foxtales DLC was also added to the game.