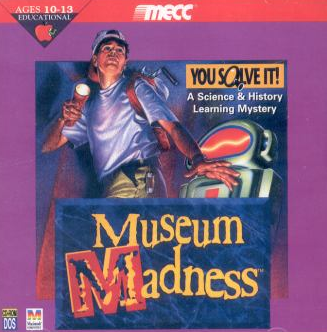 Released in 1994 for PC and Mac by MECC, Museum Madness is an Edutainment Game involving a boy and his robot sidekick working to stop a virus infecting a museum and all of the exhibits.
Advertisement:

The kid must go from exhibit to exhibit, talking to robotic replicas of famous people, finding broken pieces of technology, and rebalancing the world's ecosystem among other things, until the virus itself is discovered and deleted.