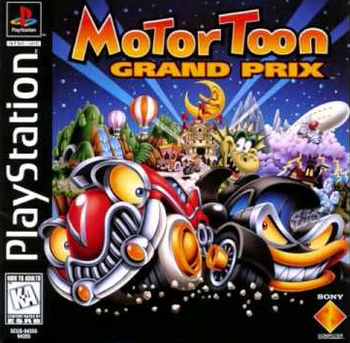 "Yo! Here's what's happening! The awesome toons are waiting for you! A whole lot of fun, and exciting surprises like secret characters! It's all starting, so get it together! Are you ready? GO!

Motor Toon Grand Prix is a 1994 Mascot Racer game for the PlayStation that is released for Japan only. It was the first creation of Polyphony Digital, best known for the Gran Turismo series. Unlike most kart racers, this game employs a coin-based power-up system where the player is able to pick up coins along the track, then spend them on a power-up roulette. Also unlike most kart racers, the game features a combination of arcade and realistic driving physics, providing players with a big hint of what's to come from Polyphony Digital.