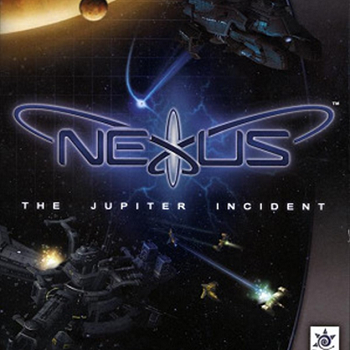 Nexus: The Jupiter Incident is an RTS for PC, released in 2004 by the Hungary-based Mithis Entertainment. The game spent most of its life in Development Hell. It started as Imperium Galactica III: Genesis, being developed by Digital Reality. However, the publisher GT Interactive went bankrupt, and the title was "borrowed" by Philos Laboratories. When their lease expired, the project was renamed to Galaxy Andromeda. Then Philos Laboratories went bankrupt, and Mithis Entertainment picked up the development, resulting in Nexus: The Jupiter Incident. While the game in its current state has nothing to do with the Imperium Galactica series, its storyline remained largely unchanged from the original project, becoming the unofficial prequel to the series.
Advertisement:

The game is notable for its unique approach to space combat, as well as its remarkable graphics for the time and attention to detail. Unfortunately, various bugs and extremely difficult Stealth Based Missions marred the otherwise interesting gameplay.

During the campaign, the player controls a small flotilla of ships (can range from 1 to 10), with one ship (Stiletto or Angelwing) being the main one. If that ship is destroyed or damaged beyond repair, the game is over. The game allows the player two main forms of controlling movement: direct Homeworld-style orders and simply issuing various orders and selecting targets from the list. In practice, the first method is usually ignored by most players, as gameplay dynamics make it a must to give control of most of the movement to the computer. The player is left managing tactics, weapons, energy distribution, and repair, which usually turns out to be a handful during heated battles. In-between missions, the player is given a certain number of points to spend on repairing and upgrading the flotilla. There usually aren't enough points to spend on all the "goodies", so the player is required to carefully manage his or her spending (unspent points don't carry over to the next mission). Also, the mission briefings do not always give the best idea of what awaits the player, so a playthrough may be required to determine the best loadout.

During battles, the player can select the ships' general behavior towards a single target. For example, the Angelwing may be ordered to conduct a "Shield Attack" on an enemy cruiser, which will cause the ship to close in and engage the cruiser with its energy shells only, maneuvering to bring the necessary weapons to bear, as well as conducting evasive maneuvers to dodge enemy shots. Once that task is done, the ship will automatically determine the next task/target, depending on the "level of freedom" assigned to the ship by the player. While the ships' maneuvering is focused on one ship, the player can manually assign various targets to the ship's other weapons. This means that a ship can simultaneously engage several enemy ships.

Weapons are divided into several groups: anti-armor (railguns, effective at destroying the hull; largely ineffective against shields), energy shells (overload enemy Deflector Shields; no effect on armor), lasers (anti-hardpoint weapons; damage specific devices; very little hull/shield damage), flak (automated anti-fighter and anti-missile laser grid), missiles/torpedoes (limited-supply guided area-effect weapons), and special (various unique weapons). Ships can also carry wings of fighters/bombers, although they generally prove to be nothing more than a nuisance, especially if the enemy is equipped with an advanced flak grid or has his own fighter complement. Shuttles can be used to capture ships, although the enemy flak systems need to be disabled first and fighters destroyed. Other systems include power generators (main and weapons), engines (main, secondary, and combat), sensors, interplanetary drives (used to exit the mission), and special devices.

For a summary of the game's plot (warning: unmarked spoilers), see here. For a work-in-progress character sheet, see here.