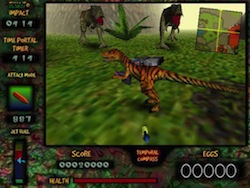 Nanosaur is a third person shooter developed by Pangea Software and released for the Apple Macintosh in 1998. In Nanosaur, you play a genetically engineered raptor from the year 4122 sent to the Cretaceous Period to retrieve the eggs of five dinosaur species to save the Nanosaur species in the future. You only have twenty minutes to complete your mission before the asteroid hits Earth. During the mission, your Nanosaur will have to blast its way through several dinosaurs while collecting weapons and powerups.

A modified version, titled Nanosaur: Extreme! was released in 2002 for the Macintosh and Windows PC. This version is exactly the same as the regular version, except more dinosaurs appear at a time as well as more powerups available.

A sequel was released in 2004 titled Nanosaur II: Hatchling. In this game, it is assumed that the first Nanosaur completed its mission successfully and returned to the future. But a group of rebel Nanosaurs stole the eggs and took them to distant planets, where they intend to use them to build an army to fight their battles against Earth. But one egg was left behind, which turns out to be a pterodactyl. This pterodactyl is sent on a mission to retrieve the stolen eggs and return them safely to Earth. The basic concept of Nanosaur II is similar to that of the first installment, in terms of collecting eggs and powerups, except that it contains three levels that take place on different planets, and you must kill hostile dinosaurs as well as turrets and other future defenses.