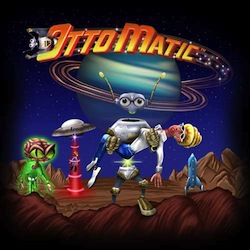 Otto Matic is a third-person shooter and platformer developed by Pangea Software for the Apple Macintosh released in 2001. It is an Affectionate Parody of the science fiction B-movies of the 1950's.

In the year 1957, an alien race known as Brain Aliens have come to Earth from their home world Planet X to abduct humans and use them as slaves for their master, the Giant Brain. Luckily for the humans, there exists a galactic police force known as the Otto Matics who send one of their own to put a stop to the Brain Aliens' plot.

As Otto Matic, your task is to explore strange worlds to rescue human slaves and alienating any Brain Aliens and their allies that stand in your way. In the spirit of Pangea's previous success, Bugdom, you traverse through ten levels while battling enemies, collecting weopons and powerups, and rescuing innocent characters. but unlike Bugdom, you must hurry when rescuing humans, because alien saucers will try to abduct them. Points are awarded based on how many humans you rescue and how much inventory you have when you complete the level.