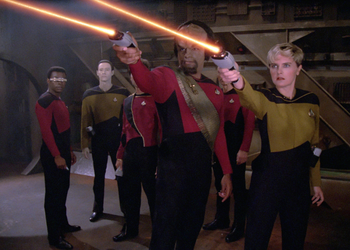 Set phasers to "highly visible."
"Rays! From the silliness of the shrink ray to the devastation of the death ray, these are the very foundations of Mad Science!"
— Professor Medulla, Sky High
Advertisement:

Any gun that shoots light, rays, waves, or something similar. Initially popular during the appropriately named Raygun Gothic era of Science Fiction, but back then it was based on pure Phlebotinum, as shooting such things from weapons wasn't known to be possible. In short, the ray gun was falling out of favor for being unrealistic. Then the laser was discovered in The '60s. Suddenly the ray gun was brought back from being a Discredited Trope.

But even now it's still treated as an Impossibly Cool Weapon, as lasers in fiction are often used in ways they can't really be. And while other ray guns do exist in Real Life (the US Army has been experimenting with microwave crowd dispersal wave generators, for example), they're still Cool, but Inefficient. However, they can very believably become practical in futuristic settings, where greatly improved science and technology would allow for the limitations to be far more easily overcome.

The term "ray gun" became a cliché even by the 1940s, having strong associations with Buck Rogers, Flash Gordon etc., and from at least E. E. "Doc" Smith's Lensman novels, was increasingly replaced by the more bad-ass-sounding generic "blaster," Smith himself generally choosing to refer to the weapons by their maker just as we would refer to a Colt or Smith & Wesson.

They are also popular as a form of Family-Friendly Firearms. One odd aspect of ray guns in a lot of fiction, especially animation and comic books, is that despite being much niftier-looking than a stream of bullets, they're actually much less harmful to be struck by than a regular bullet would be. It's extremely common for Captain Space, Defender of Earth! to get hit with an "energy beam" and fall down dramatically, but he will scarcely ever actually have a new hole burned through him, and a couple of scenes later we will see him pulling himself painfully to his feet again and saying something corny like, "Ow! Anybody get the license of the truck that hit me?" The effect seems more comparable to getting punched really hard than to actually getting shot. This is sometimes justified by the ray gun having a "stun setting," or by the hero wearing body armor or having super powers.

These lasers are supposed to burn through targets (like missiles) and cause their fuel/warhead to explode or their airframe to disintegrate when it hits, although this is also a continuous beam and requires some time to work. Solid-state pulsed lasers are also in development, which fire bursts of energy and are lighter than fluid-based lasers, but harder to cool. Last but not least, the heat from a powerful laser wouldn't just burn through clothing or make a neat, bloodless, pin-sized hole. There's a common misconception that laser beams cauterize wounds, but real laser wounds are every bit as bloody as knife wounds. It can also cause the water in the body to boil, expand and rip the surrounding tissues apart, much like a high velocity bullet impact. There are also electrolasers under development, which ionize the air so that electric current can be sent along the beam's path. Ironically, all of these characteristics make lasers far more effective as weapons than their portrayal in most fiction, which is in fact the main reason that the military is developing them in the first place. It's also probably the main reason we're not likely to see realistic laser weapons in children's shows.

A Sub-Trope of Energy Weapon, Impossibly Cool Weapon. A Sister Trope to Laser Blade. Contrast Kinetic Weapons Are Just Better, for settings where ray guns are Cool, but Inefficient.

Not to be confused with ReiGun, Railgun, the president, Nute Gunray or the Rei or a Rei with a gun.