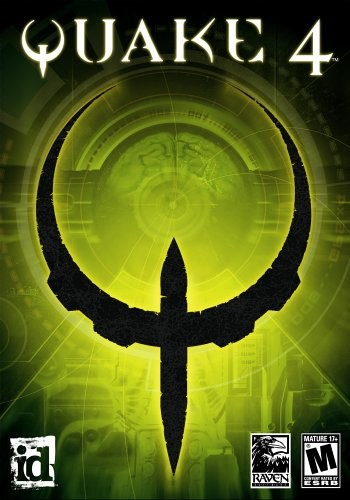 "You are Matthew Kane, a member of the elite Rhino Squad and part of the next massive invasion that spans across the entire Stroggos planet. Equipped with hi-tech weapons and mobile vehicles, and teamed with a top Marine squadron, you soon realize this war is far from over."
— The Xbox 360 manual
Advertisement:

Quake IV is the fourth entry in the Quake series, released in 2005. The game was developed by Raven Software using the id Tech 4 engine (the engine created for Doom³), and it's set in the Strogg arc as a follow-up to the events of Quake II. After Bitterman, the protagonist of Quake II, near-singlehandedly dealt a major blow to the Strogg forces, the Space Marine Corps proceed to launch another invasion of the Strogg's home planet, Stroggos, in order to terminate the menace once and for all. The player controls Matthew Kane, a corporal of the SMC's renowned Rhino Squad, and he must assist his comrades in the given objectives. But Kane has little knowledge of just what he'll have to endure in order to hopefully put an end to the war...

The game introduces reloading and NPCs to the Quakeverse, at least for single-player, giving the campaign a more generic space marine feel. In the campaign, weapons are also upgraded as you progress. The multiplayer section of the game, on the other hand, is basically Quake III: Arena with some changes such as the introduction of crouch sliding and projectile teleporting/pushing. The weaponry roster keeps most of the Quake II weapon roster, dropping only the Super Shotgun, Chaingun and BFG10K, adding the Lightning Gun and the Nailgun from Quake I and a new weapon called the Dark Matter Gun replacing the BFG. In multiplayer games, the Blaster is switched with the Gauntlet from Quake III: Arena. A later patch added the Napalm Gun for multiplayer. Speaking of multiplayer, the game came with five gamemodes: Deathmatch, Team Deathmatch, Tournament, Capture the Flag and Arena CTF (Capture the Flag... with runes!). Later patches added the DeadZone gametype and a "Buy mode" option for all gametypes where players must purchase weapons with credits a la Counter-Strike.

The Xbox 360 version of the game, and the PC Special DVD Edition, come with Quake II included.

Canonically speaking, the game is the most recent Strogg game to date, but it was followed by prequel Enemy Territory: Quake Wars in 2005.

This game provide examples of* Bear in mind that a lot of tropes from Quake II also apply here. Also, the Character tropes go to the Characters page.:

The Strogg Network Guardian attempts to thwart our hero, using their mass to wreck a lift. HUD concealed to prevent spoilers.

The Strogg Network Guardian attempts to thwart our hero, using their mass to wreck a lift. HUD concealed to prevent spoilers.