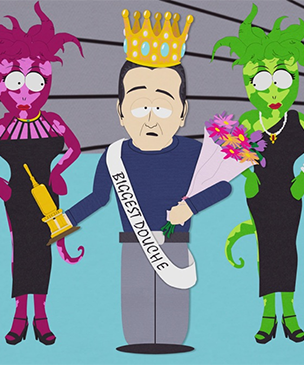 Church: You want to give out the symbols of Olympic victory to losers? That doesn't sound much like you, Sarge. So what will it be? Gold, silver, bronze and...
Sarge: Enriched uranium! The losers will be forced to wear radioactive isotopes, making sure they die the excruciatingly slow and painful death they deserve!
— Red vs. Blue PSA: "The Olympics Suck"
Advertisement:

You're being given an award, but not for something you're proud of. In fact, it's for something of which you're very, very not proud and for which you certainly don't want an award.

There are two kinds of Medals of Dishonor:

Either way, this can be Played for Drama, comedy, or even both. Usually, a recipient of such an award who treats it as such is engaging in Self-Deprecation or playing a Graceful Loser role. Other times, the recipient may be genuinely proud of their supposed award of dishonor, thus turning it into an Insult Backfire.

Compare and contrast with Overly Narrow Superlative and Mark of Shame. Monument of Humiliation and Defeat is roughly the same thing, but on a national scale. Compare Think Nothing of It, in which the hero might reject accolades for any number of reasons, chiefly humility. Might overlap with Zonk in a game show.

Note that for video games, only In-Universe examples should be listed. Any other examples likely fall under Achievement Mockery instead.