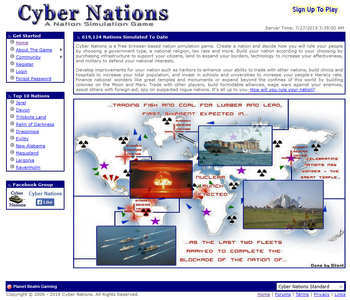 note Has nothing to do with cybering. is a browser-based nation simulation game, created on Jan. 6, 2006 by Kevin Marks. Sounds familiar, right? Well, it's very different and more challenging than NationStates: instead of selecting options from daily-generated issues, the player is forced to actually manage their nation, including bills, infrastructure, tax collection and rates, declaring war, etc. It borrows some traits from NationStates, like alliancesnote (groups of players inhabiting and developing a common area, like NationStates' regions) and eventsnote (national issues whose solutions will effect the country, like NationStates' issues). There are also colors for nations, in which same-colored nations can trade with each other with an added benefit, unlike different-colored-nation trading.
Advertisement:

Unlike the roleplaying style of NationStates, events in the Cyber Nations world are more real and Serious Business. Nations can declare war on each other for actual reasons, trade technology for money if they both agree on it, and more. And with alliances, this can get even more wide-scale and complicated: Alliances can have treaties with each other, help each other, declare collective war on each other, and more. Wars can involve several alliances, and sometimes, it can even involve almost every alliance in the game, occasionally accompanied by nukes, raising radiation that can affect everyone in the game.

So as you see, Cyber Nations is serious business. It can potentially burn way more hours of your time than NationStates, though.

See also: Democracy for an offline series of games attempting to simulate politics, and Politics And War, a Spiritual Successor that has a bit more in-depth gameplay than this game.