This page contains unmarked spoilers for all previous Five Nights at Freddy's games. You Have Been Warned! 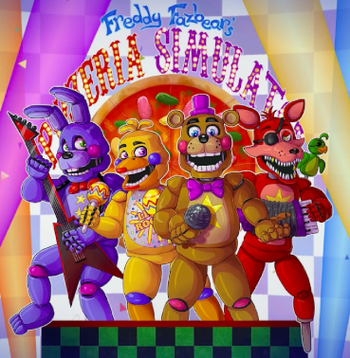 Are they ready for the big finish?note  Turns out it wasn't the end this time... or this time... not this time either... maybe...?

Welcome to your own Freddy Fazbear's Pizzeria!

Yes, after years of obscurity, we at Fazbear Ent. are still in business — and this time, our restaurant is here to stay! But no need to worry about any more incidents this time around — we're putting you in charge to see how many improvements you yourself can make for our establishment! In other words — let's see how YOU do behind the wheel!

With the assistance of your newest best friend Helpy, you can buy many different attractions, sanitary equipment, games, activities and animatronics alike—you may start off with homemade scrap, but as you progress through the week, you'll slowly build yourself up to the bigger, better tech.

But, that's not where your job ends — you also gotta keep your pizzeria up to date and functioning while keeping yourself wary about whatever may be creeping up to you through the ventilation shafts, which is impossible of course. You can lure them with different sounds, but if they're close to you be sure to turn everything off to throw suspicion off. As they say, Silence Is Golden!

Lastly, you may also find… something, or perhaps even someone; popping up at your pizzeria in the night. If this happens, don't worry! You can salvage it for money — after testing how it reacts to some relaxing music before taking it in.

Got the gist of it? There's one more thing you should remember — work on Saturday. There's a big party scheduled for that day, and you'll want all of 'em in one place. Got it? Good.

Now go build your pizzeria, and get yourself prepared for Saturday. After all, it's just five nights until you get to that point.

Freddy Fazbear's Pizzeria Simulator is the sixth (main) game in the Five Nights at Freddy's series and a Series Fauxnale. After a teaser in The Freddy Files, and a few on scottgames.com and fnafworld.com, it was released on December 4, 2017. It was advertised as a widget game set in the series' world, but turned out to be the sixth game in a disguise while still maintaining the "simulation" aspect.

Half of the game is a cutesy tycoon game, where you create, control and maintain your own Freddy Fazbear's pizzeria... and the other half is the classic lore-shaking, horrifying fare that the series was first created with. The game is entirely free on Steam and on GameJolt

According to Andy Field

the prospect of updating the game to have an endless tycoon mode with things like day-to-day challenges, an ultimate custom night featuring many of the franchise's plethora of characters, or both; in addition to the possibility of letting other developers create official games for the franchise. The custom night was confirmed to be created first. Because it was considered too big to be released as DLC, it was released as a standalone game on June 27th, 2018. The endless tycoon mode will also be released at a later point. All updates are confirmed to be free as well.

The Cassette Man, Henry Emily, sets Freddy Fazbear's Pizza on fire to kill every animatronic inside, himself, and by extension his employee, who decided that he wants to burn with all the rest.

The Cassette Man, Henry Emily, sets Freddy Fazbear's Pizza on fire to kill every animatronic inside, himself, and by extension his employee, who decided that he wants to burn with all the rest.