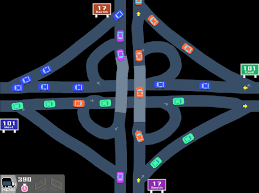 You are a traffic engineer. Draw freeway interchanges. Optimize for efficency and avoid traffic jams!
Freeways is a mobile simulation game developed and published by Captain Games and released in September, 2017. A release for Steam followed in October, 2017. In the game the player must draw roads and bridges to connected dead-end roads and allow traffic to flow. If the traffic should become gridlocked the player fails the level. At the end of every level time advances rapidly as cars are shown driving on the roads and then the player is awarded an efficiency score.
Advertisement:

The game is not to be confused with Freeway, a similarly named Atari 2600 game.