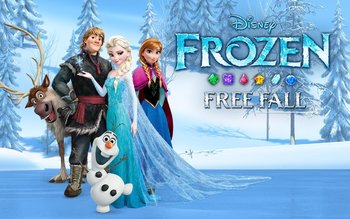 Frozen Free Fall is a mobile app free-to-play game based on the Disney film, Frozen (2013). It is a puzzle board game based on Bejeweled and Candy Crush Saga, where you explore many levels with varying objectives, such as reaching a target score, getting special items to the bottom of the board, and clearing the board with limited moves.

The game was originally released on the iOS, Android and Windows Phone platforms, and later for Windows, MacOS computers, and consoles; in the latter versions the graphics are remastered in HD and multiplayer support has been added.

Frozen Free Fall: Icy Shot is a follow up, based on Peggle.

You can play for free from iTunes

. And Snowball Fight is free on Steam

The Frozen Free Fall games in general contain examples of: