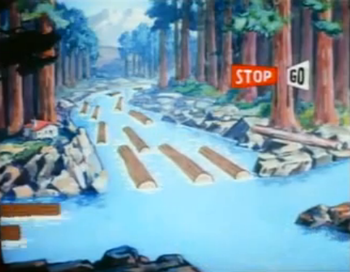 Detouring America is a 1939 Looney Tunes cartoon short (8 minutes). It was directed by Tex Avery.

It's a parody of the short travelogue films that were commonly shown in American movie theaters of the era. An avuncular, upbeat narrator typical of travelogue films of the day leads the audience on a tour of the USA, from New York to the West Coast, stopping at places including the Florida Everglades, West Point, Yellowstone National Park, a Sioux reservation, and the California redwoods.

All of this, of course, is simply an excuse for Tex Avery sight gags.