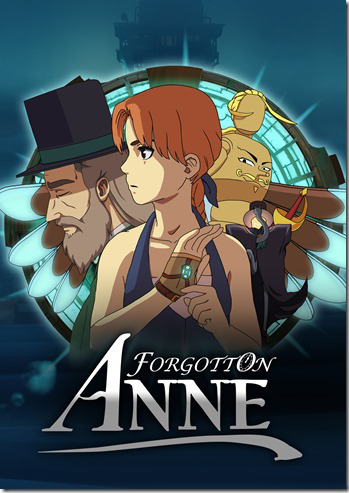 Welcome to the Forgotten Lands
Advertisement:

Forgotton Anne is an anime-inspired Puzzle Platformer, developed by ThroughLine Games and published by Square Enix Collective. It was released on May 15th, 2018 for Playstation 4, PC and Xbox One, with a Nintendo Switch version following on November 9th, 2018, and an iOS port happening on June 26th, 2019.

The game takes place in a world where lost and forgotten things (like that other sock!) end up, and where they also gain life and sentience of their own. You play as Anne, one of only two human beings in this strange realm, who carries the title of "the Enforcer" - the right hand of the world's harsh ruler, Master Bonku.

The goal of Bonku's rule is the construction of the Ether Bridge, a magical gateway back to the real world. Most Forgotlings serve Bonku in the hopes of being allowed to join him there when the Bridge is completed, but a resistance movement has arisen that considers Bonku a tyrant and does whatever it can to sabotage his work. As the Enforcer, Anne is sent on a mission to find and dismantle the resistance, but its mysterious leader, Mister Fig, keeps taunting her with hints that things are not as black and white as they seem...

Since uncovering the strange world and its secretive characters piece by piece is a large part of the point of the game, beware a great many spoilers below!

This work includes the following Tropes: