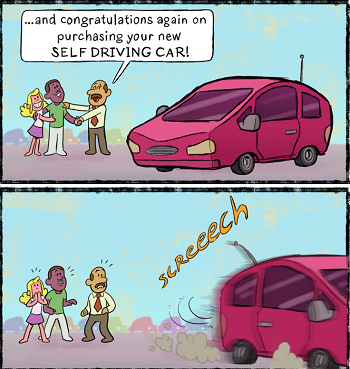 Dr. Shiouji: Say, haven't you too ever been put in a tizzy by that horrible term — automobile? What's so auto about it? If you want it to be mobile, you've still got to pump and grip and be in the highest state of awareness. Surely a classic example of misplaced exertion. The technology is incomplete. The technology is a no-no-noying. Why is it the case that's the case? Now if I were in charge, there are certain things that I would do. In fact, I've already done them. Behold... my perfection! The Full-Auto-Mobil—
Excel: (Karate chops Shiouji in the head.) You dare even attempt to utter that line?!
— Excel♡Saga, volume 5
Advertisement:

This trope refers to the operation of vehicles — not just cars — on public highways, where the vehicle has no human operating it. Might require Advanced Phlebotinum to explain how they can get away with it. This trope would not include vehicles operated by video remote control unless it can operate without the person running the screen, nor would it usually include a vehicle running automated on a test track. The trope is more about driverless vehicles on public highways.

This may be the norm in a story set in the future, but it's just as likely to be played for horror. Imagine yourself being trapped in an automated vehicle that is trying to kill you, gets hacked by the bad guys, or just goes haywire. This fear will probably delay any attempts to implement it in Real Life.

Increasingly, this is Truth in Television – from simple "guided buses" using optical guidance

. DARPA, Google, multiple major carmakers and even some leading universities have demonstrated functional autonomous cars as of 2013. Meanwhile, autopilots have existed for almost as long as airplanes have, but then there has always been far less chance of crashing into another vehicle while in the air due to there being much more empty space to navigate in.

At the extreme end, this trope overlaps with Sentient Vehicle. Compare and contrast with Attack Drone, which is typically flying and usually far more aggressive.