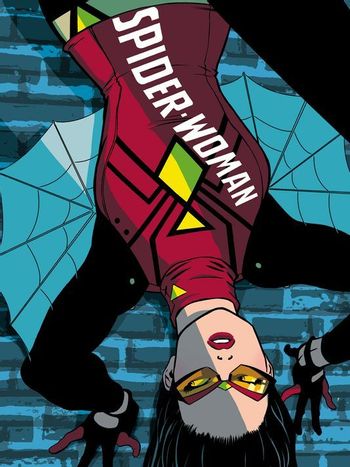 "I quit The Avengers five weeks ago today. And everyone I've ever met is dying to know why. I'm beginning to think it's not so much curiosity as it is that nobody likes my answer... But look, my parents were mad scientists who pumped me full of spider-juice just to see what would happen. I went to Hail Hydra High School and Nick Fury University. Everyone I've ever dated has super powers (except Hawkeye). I've been extraordinary my entire life. And after all these yeas of insanity... a little ordinary sounds pretty #&%^ great."
— Jessica Drew, Issue #4
Advertisement:

Spider-Woman is a comic book published by Marvel, originally published first in 2014 as a part of the Spider-Verse event. It is the fifth volume of Spider-Woman and the third starring Jessica Drew. Written by Dennis Hopeless and primarily drawn by Javier Rodriguez, the first four issues dealt with the Spider-Verse event before launching a new status quo with Jessica tackling crime as a "street-level" superhero, a new costume (her first costume change in 37 years) and also dealing with a major life change.

After being part of the multi-dimensional Spider-Verse event and dealing with her own fair share of galaxy-wide battles as part of The Avengers; Jessica decides quits the Avengers in search of a more normal life while still helping regular people. She teams up with Ben Urich and recovering ex-villain the Porcupine solving cold cases Urich has collected.

In the wake of Secret Wars, Spider-Woman was relaunched again as part of the All-New, All-Different Marvel initiative with Jessica still as a street level hero, this time with a major difference - she's 9 months pregnant. Not only does Jessica have to be a hero, but she also has to worry about her child's safety.

Tropes from Spider-Woman include: