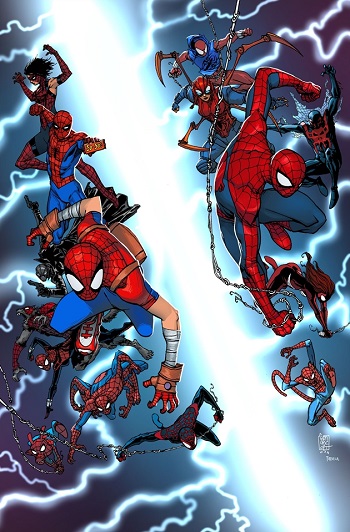 Spider-Verse is a 2014 Bat Family Crossover storyline within the Spider-Man comics. Inspired by the finale of the 1990s animated series, it continues the "Spider Totem" arc introduced by J. Michael Straczynski during his 2000s run of the comic, featuring Spider-Heroes from across the multiverse — up-to-and-including the likes of characters like Spider-Ham and live-action tokusatsu Spidey.

The first Spider-Verse event, Peter and the other Spiders of Earth-616 learn that the Inheritors (a family of vampires that includes Morlun, the vampiric creature that once infamously killed him) have not only returned, but are currently traveling the multiverse and devouring anyone that wears a large spider on their chest. And they're starting to rack up quite the kill count. With not only the lives of countless Spiders, but the multiverse itself in jeopardy, our heroes must travel to new realities to help recruit all remaining Spiders to form an army powerful enough to stop them.

The ongoing series involved with the event included the main Amazing Spider-Man book, Superior Spider-Man, Spider-Man 2099, and Spider-Woman (2014). Outside the bookending Spider-Verse issues, a number of miniseries were also created for the event, including Edge of Spider-Verse (an anthology series focused on the various alternate Spider-Men and -Women), Scarlet Spiders (following Ben Reilly, Kaine Parker and Ultimate Jessica Drew on a smaller sting operation against Jennix), and Spider-Verse Team-Up #1–3.

In the aftermath of the event were two new solo series: Spider-Gwen, focusing on both the aftermath of the Earth-65 Gwen Stacy's romp in the story and picking up where her tale in Edge of Spider-Verse left off; and Silk, focusing the adventures of Cindy Moon as she works as a mole for S.H.I.E.L.D. and tries to adjust to modern life after years of isolation.

There are also several exceptions, such as The Spectacular Spider-Man, who does not appear because of copyright restrictions.

The "Spider-Totem" storyline itself was followed up a few months later during Secret Wars (2015), with one of the tie-ins being a self-titled miniseries featuring a group of Spider-Heroes traveling the multiverse to take stock of the damage caused by the war with the Inheritors. This directly led into the short-lived Web Warriors series, where this team would continue working to monitor and protect worlds who had lost their Spiders. In 2018, a sequel event entitled Spider-Geddon released; in it, Morlun and his clan manage to escape imprisonment and seek revenge on our heroes, prompting yet another multiverse roadtrip in order to stop them once and for all. Tropes for that event go on its respective page. This was followed by a second Spider-Verse miniseries in 2019, wherein Miles Morales aims to repair the Web of Life and Destiny with the help of other Spiders following the events of Spider-Geddon.

Tying into the original Spider-Verse was the third season of Ultimate Spider-Man (2012), entitled Web Warriors, with the cartoon's version of Peter Parker teaming up with Miguel O'Hara, Miles Morales, a version of Spider-Knight, Spider-Ham, and a female version of himself named Petra Parker. An endless runner mobile game called Spider-Man Unlimited was also released during the lead-up to the event, with the selling point of players being able to collect various alternate-dimension Spider-Men. However, both tie-ins had alternate plots with different villains prompting the multiversal team-up: Ultimate has the Green Goblin traveling to different universes to get spider-DNA samples to enhance himself with, while Unlimited features an invasion by an interdimensional Sinister Six. Unlimited did hold a more direct tie-in while the comic was running, though, bringing in Inheritors as guest bosses in daily events and specifically adding Spider-Men (and -Women) who were being featured in the comic to the game's roster.

A second Edge of Spider-Verse limited series begins in 2022, acting as a prologue to the event that Marvel's announced as a conclusion to the whole Spider-Verse storyline, End of the Spider-Verse.