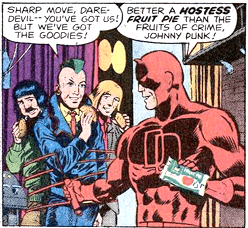 No criminal can resist them.
Advertisement:

Back in the 1970s and 1980s, Hostess had a long-running comic book advertising campaign, with story pages produced by the comic book companies themselves. They appeared in comic books published by Marvel, DC, Gold Key, Archie, and Harvey. The Marvel and DC ads, featuring prominent superhero characters, would normally have plots along the lines of:

(The non-Marvel/DC ads generally appeared in humor books, which allowed for more variety in their plots.)

As well as the "villain causes trouble, hero averts trouble with Twinkies" plot, there was also the plot that the villain would simply try to steal the treats himself, and either be defeated outright, or be defeated by the very confections he was coveting.

One Superman story, "The Spy,"

illustrates how silly these stories could get. It begins with a reporter discovering Clark Kent's secret closet with his Superman costume (and a spare). Superman himself sees the reporter snooping, and refills the closet with Hostess Fruit Pies before the reporter reveals his "big scoop." The snooping reporter is promptly fired as a result.

While DC and Marvel let their superheroes shill unashamedly for Hostess products, one action was curiously "over the line": the heroes could never be shown actually eating Hostess products. Supporting characters like Lois Lane and Mary Jane Watson and villains like The Penguin were apparently exempt from this rule, though, and other publishers' characters (e.g., shameless capitalist Richie Rich) could chomp away freely.

The Hostess ads are the most numerous and infamous of the type, but other advertisers got into the act occasionally (e.g. four Marvel and DC heroes shilling for the "Magic Snake" puzzle

). Because of their absurdity, even by the standards of superhero comics, the formula is parodied far more often than played straight. In more recent times, Subway and Snickers have occasionally had ads using a similar formula.

When parodies show up in works, it's a form of Parody Product Placement.