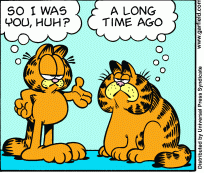 See the differences?
2003 Garfield: How did I see out of those itty-bitty eyes?
1978 Garfield: First explain how you stand on those two spindly legs.
— Garfield
Advertisement:

Sometimes, especially if a franchise is a Long Runner or is about to have a Milestone Celebration, the creators might find it fun to do an episode or TV special in which the newer versions of the characters meet their past selves, before their Art Evolution or Character Development took place. This is usually accomplished either through time travel if the franchise all takes place in one timeline or if the franchise is made up of several different continuities then it will be stated that the past selves will be from an Alternate Universe.

This will usually be handled one of two ways; the show might view the old incarnation of the characters with a level of respect and maybe with only a few tongue-in-cheek jokes at their expense (with the older versions of the characters having some critiques of their own), or it can go into full-on Self-Deprecation, poking fun at how "bad" the show used to be and Flanderizing the earlier versions, sometimes to the level of Shallow Parody. No matter how even-handed the trope is played, though, it will rarely if ever make the old incarnation of the franchise look outright better than the new (after all the new one is more in the selling game).

The second type is more likely when a different writer is handling the newer installments of the franchise, though having it be used as an outlet for Creator Backlash by the same creator is also possible. As such, use of this trope may either bring fans of all incarnations of the franchise together and be a celebration of the franchise as a whole, or it could just entertain new fans while alienating older fans.

Related to Era-Specific Personality, Art Evolution, Retraux, and (of course) Early Installment Weirdness. Future Me Scares Me, I Hate Past Me and Other Me Annoys Me may also come into use. Compare Revisiting the Roots, Back to the Early Installment.

In the first level of Mickey Mania, you can interact with Steamboat Mickey, who runs away from you scared of his future colored self

In the first level of Mickey Mania, you can interact with Steamboat Mickey, who runs away from you scared of his future colored self