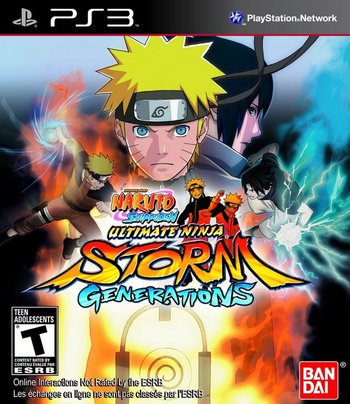 Naruto Shippūden: Ultimate Ninja Storm Generations is a licensed Fighting Game (based on the Naruto franchise) developed by CyberConnect2, serving as the sequel to Naruto Shippuden: Ultimate Ninja Storm 2. Instead of free-roaming stories like the past two Ultimate Ninja: Storm games, the story focuses on each character and uses a flip-book effect summarizing events of the series intertwined with unique-to-the-game anime footage from Studio Pierrot. It has, in turn, balanced the characters while adding new ones, fixed the Substitution Jutsu spamming with a new meter, and fixed the online play, as well as add in a new Cancel system.

The game itself has been released since Febuary 24th, 2012 in Japan (the same date as CyberConnect2's other big game of that month, Asura's Wrath) and was released on March 13th, 2012 in the United States and March 30th, 2012 in Europe and other PAL regions.

A sequel for the game, Naruto Shippuden: Ultimate Ninja Storm 3, has been released in 2013 on both the Xbox 360 and PS3, and goes all the way back to the beginning of the manga series with the Kyuubi attack (while adding the details recently revealed in the manga on what actually happened), and is shown to have the big Boss Battles in the game again, while keeping many of the gameplay enhancements of Generations.