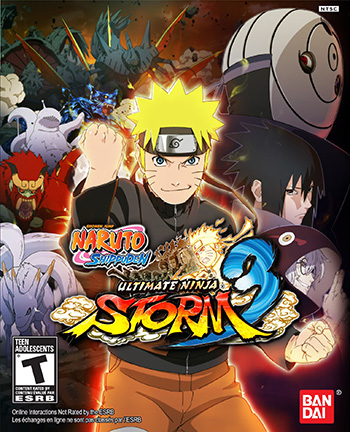 The storyline begins where Naruto Shippuden: Ultimate Ninja Storm 2 left off, right after the Invasion of Pain arc and the destruction (and reconstruction) of the Hidden Leaf Village. After the battle against Pain, the Five Kages decide to meet in a summit to decide how to deal with the threat of Akatsuki. Meanwhile, Naruto learns about Sasuke's dark deeds, and he must decide whether he insists in his goal of rescuing his rogue old friend, or try to take him down to stop his madness. During this adventure, Naruto will discover the remaining mysteries of his birth while the whole ninja world is immersed in the biggest War ever known. Just like its predecessors, the narrative includes omissions and additions.

Gameplay enhancements include an updated Story Mode with in-game cutscenes like Naruto Shippuden: Ultimate Ninja Storm 2, with more emphasis on cinematics in the storyline than before, a Mass Effect-styled decision system called "The Ultimate Decision" (which lets players alter the outcome of certain storylines as well as the difficulty level), and Hack and Slash-styled gameplay from the PlayStation Portable game Naruto Shippuden: Ultimate Ninja Impact, which are now main storyline forms of gameplay.

General gameplay enhancements include updated super attacks for the characters, plus a new Lag Cancel called "Awakening Cancel" — when attacking, a quick usage of Awakening during a combo (which can now be used anytime instead of needing to lose a specific amount of health using the right stick unless in a particular story mode fight) will cancel the current combo and the character will use a main combo exclusive to their Awakening move, and can be swapped back to the normal mode at any time with the flick of the right stick. Awakenings now have different actions and techniques as opposed to just one, and now don't just rely on the Chakra meter.

Also, the cinematic boss fights, one of the most celebrated features in the series, are back once again after their absence in Generations.

You can find the current official site here

. The first trailer can be found here

. There is also an Updated Re-release by the name of Full Burst, featuring improved graphics (and some free DLC costumes if bought as a Retail Copy instead of just the DLC itself) and an additional story chapter: the Uchiha brothers vs Sage Kabuto. It is available both at Retail for consoles and PC, making it the first Naruto game ever released on this platform. The game was also launched with a special add-on pack for owners of the original version on consoles, similar to Super Street Fighter IV: Arcade Editon and Dragon's Dogma: Dark Arisen, as well as Steam support.

Once the closest of friends, now the deadliest of enemies, Naruto makes his stand against Sasuke to protect his homeland from his ally-turned-traitor.

Once the closest of friends, now the deadliest of enemies, Naruto makes his stand against Sasuke to protect his homeland from his ally-turned-traitor.