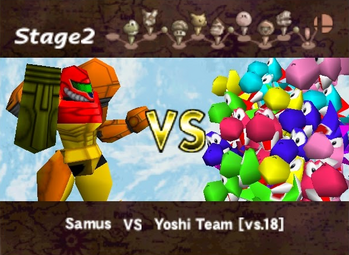 "You're the species... I'm the extinction!"
Advertisement:

Multi Mook Melee is when, instead of or in addition to a Boss Rush, the player may fight a seemingly endless stream of Mooks, Blue Mooks, Cave Mooks, Elite Mooks, Giant Mooks, Metal Mooks, Fire Mooks, Ice Mooks, Light Mooks, Minibosses and the like, which may slowly become tougher. This may be featured in the plot (almost any game with an arena is bound to have this) or as a minigame, bonus feature or multiplayer mode.

When Multi-Mook Melee is turned Up to Eleven, you have The War Sequence, which has you fighting virtually hundreds of mooks at once. When you're surrounded on all sides, expect to Hold the Line and do some Radial Ass Kicking.

And, of course, you have the ever-popular hybrid of 3M and Strategy: Tower Defense.