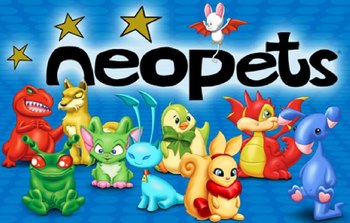 started out with a website created by Welshman Adam Powell, launched in 1999. In short, it's the virtual pet site. The basic idea is you are a Neopian — i.e., an owner — with a former limit of four Neopets (six as of November 2019, and seven with premium) per account. Owners can take care of their pets by feeding them and playing with them, but there are a number of things they can do — buy and sell items, play Neopets games, discuss on the Neoboards, explore Neopia, train and battle with their Neopets, and design a webpage. Some Neopians strive to become rich, others use it as a place to post Neopets fanwork, and still others use it to win contests.
Advertisement:

The site has since evolved into a franchise — video games have been released, a now-discontinued Trading Card Game was made, as well as Nickelodeon shorts, a breakfast cereal, and a magazine. Neopets also provides a simple, efficient way of advertising — sponsor games. These games give easy Neopoints, so they're played by a lot of Neopians every day, which provides some good advertising. It's also rather successful with merchandise; McDonald's and Burger King even had Neopets plushies as part of their kids' meals some years ago.