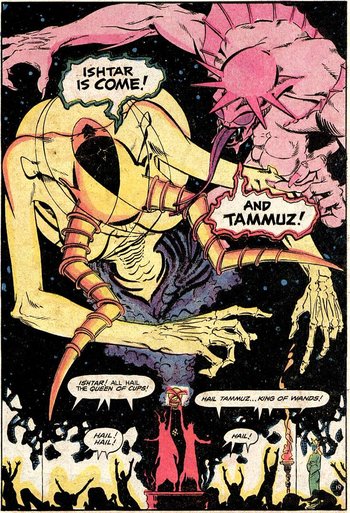 You can meet some interesting people at parties in New York.
They banded together, and went forth to battle to help Tiâmat.
They were furious, they plotted day and night without ceasing ...
She bedecked them with brightness, she fashioned them in exalted forms,
So that fright and horror might overcome him that looked upon them,
So that their bodies might rear up, and no man resist their attack ...
They carried the Weapon which spared not, nor flinched from the battle.
– Enûma Eliš
Advertisement:

The Mesopotamian cities and nations (including Sumer, Akkad, Assyria, Babylon, and various others) are one of the oldest known major civilizations in human history, and had a mythology as grand as any other, including the oldest of all surviving heroic epics, The Epic of Gilgamesh. However, unlike with many other ancient civilizations, knowledge about Mesopotamia's culture almost completely died out until its rediscovery by archaeologists in the mid-19th century. This gap led to the many centuries of Mesopotamian mythology having far less cultural impact than its later successors, such as Classical and Egyptian Mythology.

Mesopotamian mythology has remained relatively obscure, but the relative lack of knowledge about it has actually worked in its favor in modern pop culture, allowing it to serve as a ripe opportunity for an original Genius Bonus or Framing Device, in contrast to the more frequently-used and so over-familiar references to Classical and Egyptian mythologies. It is especially common to have demons or other supernatural beings have an origin from this civilization; the sheer archaic weirdness of their original descriptions (along with some massive Values Dissonance) makes them suitably uncanny for the purpose. Such uses serve as a modern alternative to Egyptian monsters, which were extremely common in the early 20th century.

In a pinch, an ancient supernatural menace can also come from somewhere else in The Middle East, especially the Levant (which drew some cultural influence from Mesopotamia, as well as from Ancient Egypt and the Hittites). It helps that The Bible mentions both Mesopotamian and Levantine kingdoms among the various foes of Israel and Judah, and that various deities from those cultures made their way into Abrahamic demonology, meaning that this trope (like the Nepharious Pharaoh) can overlap with Biblical Bad Guy.

See the notes on Mesopotamian Mythology for explanations of the significance of many of the names mentioned below.