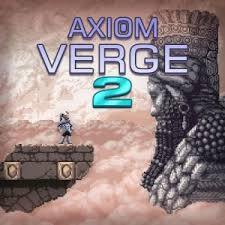 Axiom Verge 2 takes place within the same setting as Axiom Verge, but takes place both after part of the first game and before another part of it. Instead of Trace, it centers around Indra Chaudhari, multi-billionaire CEO of the Globe 3 corporation, who is drawn to an abandoned Antarctic research station in response to a mysterious transmission that references her missing daughter.

Following more mysterious messages, Indra travels through a strange freight elevator and drowns in a rising lake before being revived in a new body by an "Arm" named Amashilama, now trapped in the mysterious parallel world Kiengir, a torus shaped Ringworld. Indra must navigate her way through a dangerous and wild landscape, uncovering the history of the alien world, the fate of expeditions from Earth prior to her arrival, and the person behind the mysterious messages addressed to her.

Axiom Verge 2 iterates on its predecessor with a more streamlined upgrade system, expanding Secret Worlds into a parallel world inside the Breach with an 8-bit aesthetic, and changing disrupting enemies into a full fledged hacking mechanic.

While it retains aesthetic similarities with its predecessor, when compared to the H. R. Giger inspired Bio Punk post-apocalyptic landscape of Sudra, the world of Kiengir is far more ancient and wild, with many areas being near untouched wilderness or abandoned ruins. Although it remains a Metroidvania, progression is far more open ended, with gameplay pulling cues from open world survival games, melee centric combat inspired by the likes of Ninja Gaiden, and the Breach world segments drawing from classic platformers such as Super Mario Bros..

First revealed during Nintendo's 2019 Indie World presentation, Axiom Verge 2 was surprise launched on Nintendo Switch, PlayStation 4, and Epic Games Store on PC on August 11, 2021, with a PlayStation 5 release planned in the future.

Axiom Verge 2 has examples of: