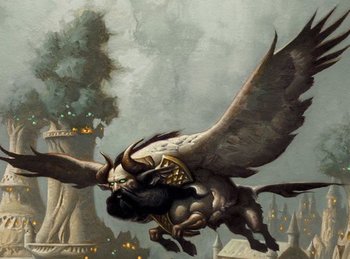 Who ordered the buffalo wings?
Advertisement:

Lamassu are creatures originally from Mesopotamian Mythology — Sumerian, Babylonian and Akkadian myth, specifically — where they were depicted as winged, human-headed bulls or lions, usually either with horns or horned hats, and characterized as protective, divine beings. In Mesopotamian architecture they are often depicted in pairs guarding city gates or entrances to palaces. They were typically described as female entities; less commonly, a largely similar creature called a shedu appeared as their male counterpart.

In modern fantasy, lamassu (often spelled "lammasu" instead) are a somewhat rare choice for creatures — they're fairly obscure, and better-known, similar beings from other mythologies are often used in their stead — but still have their share of representation. They're often used as a more exotic alternative to sphinxes, and tend to share their characterization as wise, ancient mystical beings found in deserts and southern lands. They're also a popular choice when a work or a setting is based on Middle Eastern or Babylonian themes.

The precise distinction between lammasu and shedu is often highly varied. In some cases, only one type is present — usually lammasu — and that is that. In others, either type may be the male or female of the same species, or two distinct One Gender Races. Similarly, they may be only lion- or bull-bodied, or the two types may be distinguished by which animal they resemble. Horns may or may not be present in any given depiction.

For creatures with similar appearances, connotations and preferred stomping grounds, see Our Sphinxes Are Different. For other winged, lion-bodied or sometimes human-headed mythical creatures, see Our Gryphons Are Different and Our Manticores Are Spinier. Subtrope of Mix-and-Match Critters and Beast with a Human Face. May overlap with Mesopotamian Monstrosity.