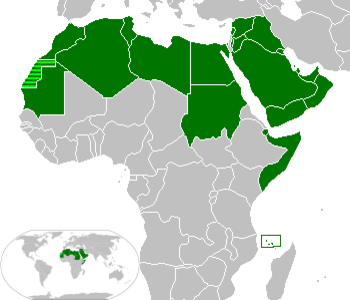 Strictly speaking, the Arab world consists of the majority (but not all) of the countries forming the Arab League

, an intergovernmental organization meant to unify and represent Arab interests. All members of the League in The Middle East and North Africa, plus Mauritania, which is geographically located in West Africa, are unanimously regarded as part of the Arab world. For economic and political reasons, the League also includes three East African countries whose populations mainly speak other languages: Comoros, Djibouti, and Somalia. They adopt Arabic as an official language and attend the League's meetings in Cairo, but they are not popularly considered part of the Arab world because Arabic is not widely spoken there. Nevertheless, their inclusion into the Arab League means that they are usually listed in some publications, including here. The people of Malta, a Southern European island country on the Mediterranean Sea, speak the descendant of an Arabic dialect, but the country has never been considered Arab since the Europeans reconquered it hundreds of years ago.

To describe the Arab world, one must first describe the Arabs themselves. The Arabs are, simply put, people who speak the Arabic language and adhere to Arab culture and traditions. Taken together, Arabs constitute the world's second largest ethnic group, after the Han Chinese. However, the Arabs are at the same time also a heterogeneous people. Many Arabs prefer to identify themselves based on their local region first before a unified Arab identity, which is not surprising, considering the size of their population and settlement. The fact that there are many Arab countries is a testament to this.note Of course, political interference by European colonials was a major factor as well, but even leaving it out, many historians and ethnologists have argued that a unified state encompassing the entirety of the Arab world will simply not work (as the various short-lived all-encompassing caliphates could testify) except perhaps as a very loose federation (we're talking "only a notch or two more unified than The European Union" here). Like the Han Chinese, the Arabs started out in a relatively small area of settlement and expanded it through conquest, intermarriage, and assimilation, transforming many other formerly unrelated ethnic groups in the Middle East and North Africa into Arabs.

The Arab world is often divided into two big regions by the Arabs themselves: the Mashriq, meaning "East" (Egypt, Sudan, the Fertile Crescent minus Israel and the Arabian Peninsula), and the Maghreb, meaning "West" (consisting of the Western Sahara/Sahrawi Arab Democratic Republic, Morocco, Libya, Algeria, Tunisia and Mauritania).note The line that separates the Mashriqi and Maghrebi worlds is usually construed to be located somewhere in Egypt, a bit west of Alexandria. The Mashriq, specifically the Arabian Peninsula, is the cradle of Arabs and the Arabic language, whose standard register developed there.note Modern Standard Arabic is based on Classical Arabic, a highly antiquated language spoken in the peninsula during the 7th century CE, when The Qur'an was composed. The Maghreb, meanwhile, is distinguished by its history as the homeland of the indigenous Imazighen ("Berber") people. Most people there can trace their roots back to ethnic Amazighs, but many additionally claim "true" Arab ancestry (whatever that means) from the various Bedouin tribes that made their way west from the Arabian Desert and began herding in North Africa (and intermarrying with the Amazigh, whose language and particular history aside were pretty similar).

Historically, the Arab world was synonymous with the Arab empires and caliphates. Arab nationalism arose in the second half of the 19th century within the slowly-crumbling Ottoman Empire along with other nationalist movements. The Arab League was formed in 1945 to represent the interests of Arab people and especially to pursue the political unification of the Arab countries, a project known as Pan-Arabism. Pan-Arabism became incredibly popular among circles of the leftist Arab politicians who were wary of the influence of the United States and hostile to Israel. On the other hand, Arab monarchies which adjoin the Persian Gulf, chief among them Saudi Arabia, soundly rejected it, as they were more interested in keeping good relations and trading with the West (they are still averse to Israel, of course, but they are less vocal about it). The division continued after pan-Arabism shifted to pan-Islamism in the 1970s, and continues to serve as an underlying dividing point in the Arab world today, right next to the conflict with Iran.

While the countries of the Arab world all speak Arabic, their dialects are NOT mutually intelligible. The Arabic language is an example of a dialect continuum

, in that the closer two dialects are, the more likely they are mutually intelligible, and vice versa. There are somewhere around 25 dialects, many of which are very different to each other. In far-flung areas, the dialects are actually more divergent than different languages in Europe (e.g. Moroccan Arabic is utterly incomprehensible to Egyptians, much more than German is to the Dutch). The official unifying language of Arabs is a register called Modern Standard Arabic, but its usage lies in writing and official publications; it is never used for day-to-day communication, which can be a real pain for foreigners. The unofficial unifying language is Egyptian Arabic because of the country's reputation as an entertainment powerhouse; most Arabs understand the dialect thanks to the dozens of soap operas and films Egypt churns out every year. That being said, the Internet (yes, the Internet) has led to the linguistically-intriguing realization that while the Arabic varieties are mutually incomprehensible in their spoken forms, they become tantalizingly nearly mutually comprehensible when written in Arabic script and using "etymological" spelling. (Indeed, it is based in part on this discovery that linguists have hypothesized that most modern varieties of spoken Arabic are descended from a common "Koiné Arabic" rather like how the various Romance languages are all descended from a common Vulgar Latin.)

Also note that many Arab countries have minority ethnic groups that speak different languages. The biggest are the Kurds of Iraq and Syria, followed by the Imazighen of Algeria and Morocco. Religion is also an enduring issue; although most Arabs are Muslims, there are significant populations of Arabs who follow different religions, including Christianity and Druze. In fact, Lebanon was a Christian country until its civil war and still hosts the largest percentage of Christians in any Arab country. Furthermore, the Lebanese ethnic group actually is majoritarian Christian when one takes into account the Lebanese diaspora which is mostly Christian, especially considering more Lebanese people live outside of Lebanon than in it. All in all, do not treat Arab and Muslim as synonymous, though one cannot also deny the role Arabic plays in unifying Muslims as a language of prayer.

Capitals: Laayoune (claimed), Tifariti (de facto)note Laayoune falls in the Moroccan zone of the territory, so the SADR bases itself in the village of Tifariti to the east.
Largest City: Laayoune

Proclaimed Capital: Jerusalemnote As with the West Bank, the PNA exercises limited self-rule over East Jerusalem since the Six-Day War. West Jerusalem has been under Israeli control since the Arab-Israeli conflict first erupted in 1948.
Administrative Center: Ramallah
Largest City: Gaza Citynote As with the rest of the Gaza Strip, the PNA and Israel have little say in the administration of the Gaza City after the 2007 Hamas takeover.