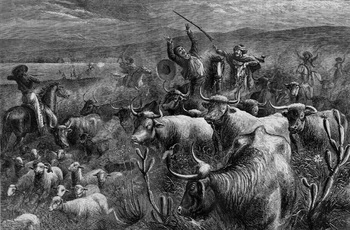 The Evil Counterpart of the Cowboy who uses the same skill set—riding, roping, and herding—to steal livestock, primarily cattle and horses. While livestock thievery is nearly as old as domesticated animals themselves, the Rustler does it wholesale, stealing large numbers of animals.

There are the two-bit versions, who steal a few cattle to sell for pocket change, but real Rustlers come in two versions:

Of course, it shouldn't be that difficult to figure out who is stealing as the new brand has to be close to the old brand so that it can cover it up. (For example, covering a "Lazy S" brand with a "Lazy 8" brand — you just extend the S to turn it into an 8). Sometimes there are so many brands running around that there are multiple suspects. The definitive proof is usually killing a cow with a suspicious brand, skinning it, and looking at the hide from the inside. (Somehow you can tell). Of course, both the innocent and the guilty tend to protest the killing of their cattle.

Sometimes everybody knows what is going on, but the rebranding keeps it from being open theft, and people live with it because the thief either has political connections, or has hired The Gunslinger as his Dragon. Sometimes both. Often a Determined Homesteader or Lone Rancher stood up to him and got himself killed. Then The Drifter shows up...

Oh, and the penalty for Rustling? In most Western fiction, to be hanged by the neck until you are dead, dead, dead, possibly without the preamble of a trial; still, in more law-abiding communities they do haul them in to go before a Hanging Judge, and a jury made up of Townsmen and Cowboys.

Pretty much always villains in a Western. Compare Evil Poacher, or Roguish Poacher, if the rustlers are meant to be sympathetic and the Cattle Baron the villain. For Science Fiction rustlers, see Aliens Steal Cattle.