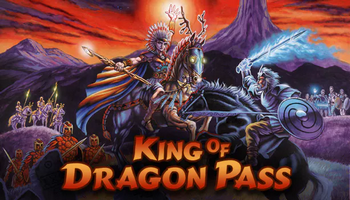 King of Dragon Pass is a strategy game developed by A Sharp (A#). Set in the past of Glorantha, the setting for RuneQuest, the player leads a clan of bloodthirsty Orlanthi to dominance over the freshly colonised land of Dragon Pass by managing the clan's economy. This is done by conducting its raids against neighbours and making other wise decisions as the seven-member clan ring.
Advertisement:

The gameplay itself is a strange mix of strategy, RPG, and Interactive Fiction; the usual macromanagement of the clan is spiced by individual decisions of the nobility and story choices made in a Gamebook-like format. Should Voskandora the war-leader engage her opposite directly using her axe and battle magic, or try to keep herself safe behind her thanes? Should the clan pay the extra five cows worth of goods to try to find a wife for one of the ugly carls? These are all in the player's hand and might have seemingly unrelated long-term consequences.

The game was originally released in 1999, but received an iOS port in 2011, featuring new scenes and tweaked gameplay. In 2012, GOG.com released a patched 1999 version

that includes the iOS changes and additional bonus content. GOG.com finally caught up in 2017 and updated their release to the remastered version as well, though the 1999 version is still available as an extra download.

The spiritual successor, Six Ages: Ride Like The Wind, was released in June 2018.