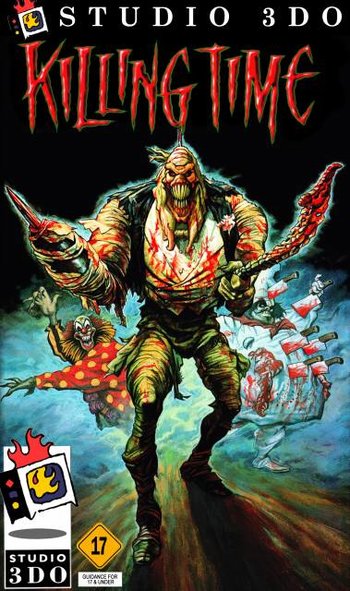 Way to show some backbone there, fella.
Advertisement:

Killing Time is a horror-themed FPS video game with Full Motion Video components, developed by Studio 3DO and released in 1995 for their 3DO Interactive Multiplayer console.

It was initially meant to stay as an exclusive, but was later ported (with substantial changes) to Windows 95 PC platform in 1996 by Intrepid Software and to Macintosh when the 3DO system failed to meet sales expectations. The PC version has significantly improved level design and controls as well as higher resolution weapons, but the FMVs are significantly more compressed and pixelated, and the enemy sprites are also much simpler (comparable in quality to Doom or Duke Nukem 3D) in contrast to the high-resolution live-action sprites of the 3DO version.

The player controls an ex-Egyptology Student, trapped on a fictional 1930s version of Matinicus Isle, Maine, within the estate of wealthy heiress Tess Conway. In 1932, during the night of the Summer Solstice, Tess, while attempting to use a mystical Ancient Egyptian Water-Clock which purportedly grants eternal life, vanished, along with many of her society friends. The player's objective is to find, and destroy, the Water-Clock, and discover the secrets of the estate, all while beating back the many horrors that now occupy the island from beyond the grave.

Killing Time, despite its general first-person shooter gameplay is unique, especially for its time. It was one of the first FPS games to feature interconnected levels forming a continuous open world, rather than a simple set of linear levels. Throughout the game the plot is slowly revealed to the player through numerous ghostly Cutscenes which are integrated into the game level geometry, all of them performed by a cast of professional actors. Unlike other games that deal in the mythology of other cultures, the producers of Killing Time relayed accurate knowledge of Egyptian lore in the story. Also unique for its time, the game even includes several songs written exclusively for the game along with an impressive sound track.

The PC version of the game was only available via digital distribution on the obscure Zoom Platform website for a couple years, but as of November 2016 is now available on GOG.com and Steam as well.