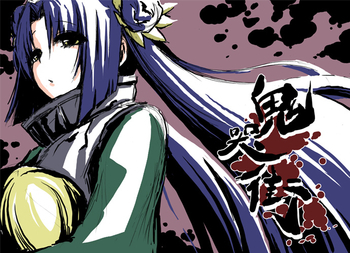 A Visual Novel eroge released by nitro+ in 2002.

In a future Shanghai, there are two types of Kung Fu masters, those who mastered their internal qi, and those who mastered their physical skills. The qi masters are able to output a stronger energy coming from their life itself, but it took a long time to master it. It was easier to just train their physical skills, but there was a limit to how strong a human body can be. So there were a balance of many average physical skill masters and few strong qi masters. However that balance broke when cybernetics came into play. Kung Fu masters would replace their body with robotic parts and attain a strength that a normal human can never achieve. That's how no one tried to become qi masters anymore when they can easily become powerful by using cybernetics, and qi masters decreased in numbers.

Kong Taoluo is one such qi master out for blood. He must kill those that betrayed him and scattered his younger sister's mind into five seperate gynoids.

A Fan Translation patch for the remake version has been released in 2015. It can be obtained here

Tropes employed in this series are: